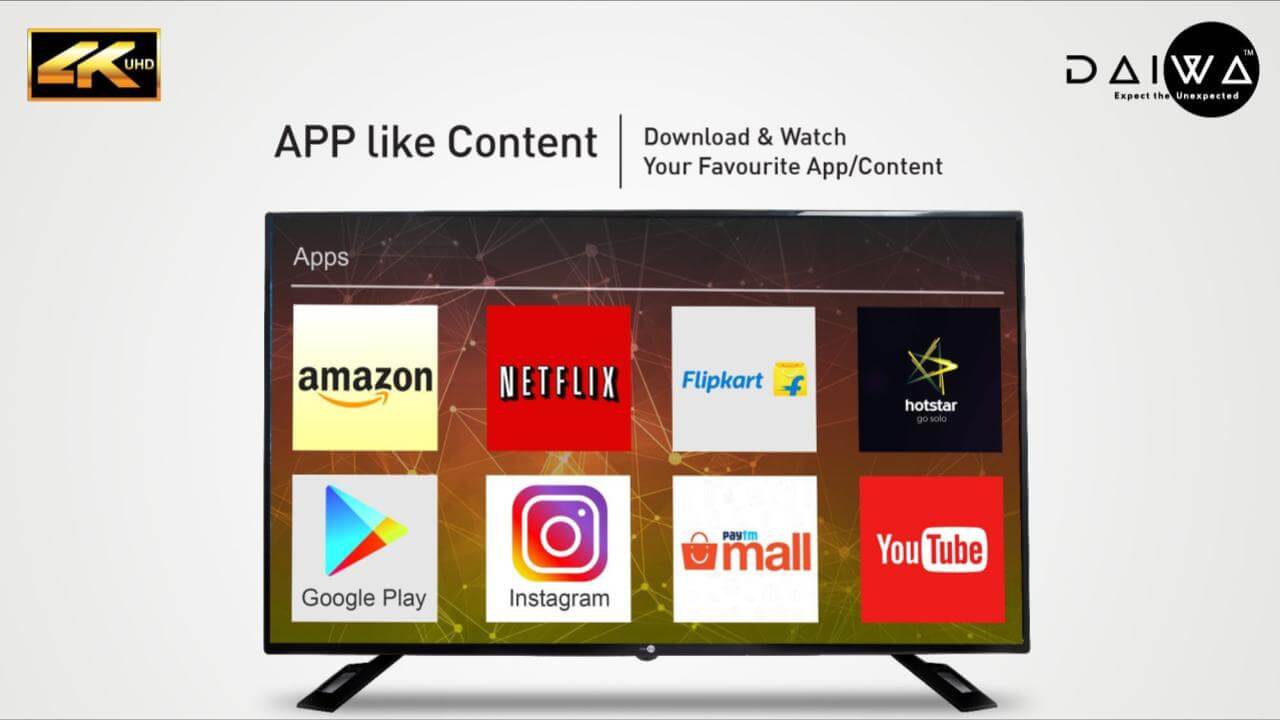 Daiwa 4K TV Launches, Know about Its Features, Cost and Competitor
Date : 09 May 2018 Posted By :

Daiwa 4K TV has Launched two new smart TV sets in India with Screen 55 inches and 49 inches. Users can purchase these TVs by visiting websites. The two new smart TVs from Daiwa are D55UVC6N and D49UVC6N.

The Daiwa TV’s accuracy is 3840×2160 pixels. A 360-degree design is provided for all viewing angles on the TV. This will give you a real experience while watching TV. In addition to Daiwa 4K TV Sound, it is integrated into a built-in speaker box. The device includes screen capture, common filter and image enhancement function.

Both 1 GB of RAM and 8 GB of internal storage have provided on the Daiwa 4K TV. Both Daiwa 4K TV models are compatible with Android and iOS platforms. Eco Vision was awarded to reduce power consumption in the device. Both Daiwa 4K TV includes the work of the Google Play store. Users can download many applications such as Netflix, Hotstar, and Youtube by visiting the Play Store.

Both TVs have features such as three HDMI, USB, Bluetooth, Wi-Fi, and Ethernet connections. In addition, the power device gave a power of 20 watts.

Cost of Both Tv of Daiwa 4K TV

Daiwa 4K TV will be competing with Thomson 43 UHD 4K

The TV has 1GB and 8 GB of RAM, and the ARM CORTEX-A7 has a processor. Talking about the TV sound system, it has two 2 outputs of 10W audio. According to the company, due to the habit of listening to the fast TV in India, a large audio system has given. For TV connectivity, 2 AV, 2 USB, 1 PC Audio and 3 HDMI ports have provided. On TV, features like web browsing and TV broadcasting come with Wi-Fi and LAN connectivity. On TV, you can easily download any app and movie by downloading it. And the price of Thomson 43 UHD 4K is 27,999 rupees.