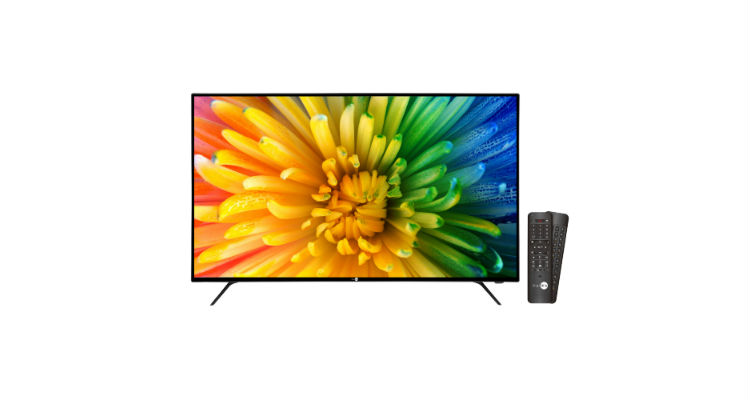 The Built-in 20W Soundbar audio technology brings theatre like a sound effect at home. The new smart TV is powered by Android 7.0 Nougat and it comes with inbuilt apps like Netflix, Hotstar.

The new smart TV comes with 4K LED Smart TV exhibits a sense of sleek sophistication, with metal on the frame that enhances the ambiance of the room. It features a screen resolution of 3840×2160 and embedded with A+ Grade Panel & contrast ratio of 500000:1, that shows a clearer and smoother picture with more real-life details.

The TV also has wide color gamut NTSC 95 percent that enhances the reds, Greens and Blues. The Built-in 20W Soundbar audio technology brings theatre like a sound effect at home. The new smart TV is powered by Android 7.0 Nougat and it comes with inbuilt apps like Netflix, Hotstar, and YouTube. The TV is also backed by a 1GB of RAM and 8GB of internal storage. The TV comes with AI Powered Sensy technology (with Voice Command), that works when downloaded on the Smartphone.

Technology creates a TV GUIDE APP that creates a wall of moments directly accessed from the Set-top Box. Technology also allows users to access Set Top box with the TV remote, making it one for all. The Smart TV also comes with a Web Play Remote, which works as an air mouse and also has a QWERTY Keypad for convenience. Furthermore, the product is already available with leading retail and e-commerce stores in India.

To recall, the company has unveiled its first ‘Quantum Luminit Smart LED TVs in 124cm(49inches) and 140cm(55inches)’D50QUHD-M10 & D55QUHD-M10 in October this year. It is powered by HDRX, the latest technology optimizes every scene, every frame, and every pixel to give rich colors, superior contrast, and in-depth detailing. The Daiwa 4K HDR Technology features a screen resolution of 3840×2160 and A+ Grade Panel that brings a dynamic contrast ratio of 6000000:1, to create an everlasting impact on the visual senses.