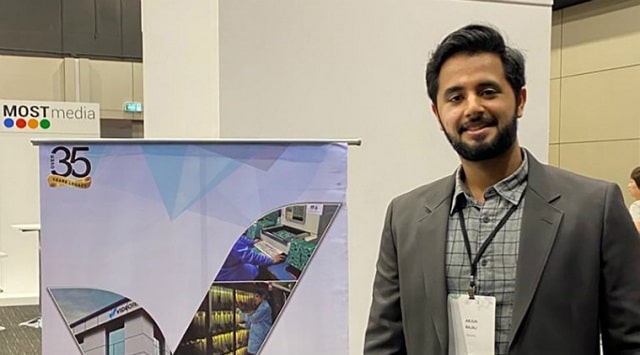 Videotex Director: ‘We plan to give certain advantages to customers which others are not offering’’
Date : 04 Jun 2020 Posted By :

After the smartphone segment, the television market in India is becoming more and more competitive. While some OEMs (original equipment manufacturers) are entering the TV segment, well-established brands are also launching their own smart TVs in the country. There are also manufacturers who have multiple brands under their name and one such company is Videotex.

Videotex started with motherboard manufacturing in 1984 in Ludhiana and moved on to manufacture colour TVs for other companies in 1991 as an OEM. In 2008, Videotex set up a factory in Greater Noida and since 2013, it is manufacturing LED TVs for various reputed brands.

At the moment the company makes TVs for 25 brands and sells LED TVs under three of its home owned brands — Daiwa, Telefunken, and Shinco. We spoke to Arjun Bajaj, Director Videotex International and CEO and founder of Daiwa and Shinco, about the vision of the company and its brands and how he sees the Indian television market evolving. Following is an edited version of the conversation.

What differentiates Daiwa, Shinco and Telefunken?

Videotex has three brands of its own– first was Daiwa, the second Shinco, and we are now the official brand licensee of Telefunken. Daiwa sells mostly in the offline market and it is our oldest brand. Telefunken is a German brand and currently holds six to eight per cent of market share in Europe. We have taken the license of Telefunken for the Indian market in September 2019. Shinco is a year-old brand.

What makes the audio different on Telefunken TVs? Why is it superior to the other two brands?

What makes the audio of Telefunken superior to others is the kind of speakers that we use and the kind of technology that we are putting in it. We have designed the cabinet in a way that the sound surrounds differently compared to the other brands. But it’s not like we don’t focus on the sound part of the other brands. Telefunken is known for sound, which is why we have to make sure that the audio part of it remains the best.

What pushed you to start your own brand and why manufacture under three labels?

In 2016, we started Daiwa as an online brand and started putting it in the offline segment as well. The brand started getting established in the offline market and there was some really good demand coming from there. So we decided that for the online market, we needed another brand so that there is no conflict and launched Shinco. And the reason for the third brand Telefunken is that it was well-known in the European market. Since a lot of popular brands like Thomson and Kodak had started to come to India, we realised that we should have a brand with a global name to compete with them. That’s when we did a survey and decided that we should go ahead with Telefunken.

What is your target market?

We are focusing on Tier 2 and Tier 3 cities mostly. But we are also receiving good response in the metropolitan city– the reason being people are understanding that these expensive products from reputed brands are just charging for their brand name. When they see our TVs working in the shop, they realise that our products are much better than those brands.

In India, most people don’t know about Telefunken, so what’s your strategy?

With Telefunken, we initially started on Amazon so that it becomes easier for people to recognise the brand name. We launched the Telefunken-branded TV in India via Amazon in Diwali and we also ran a brand campaign on the portal supported with a digital campaign. From there we got maximum clicks.

We are increasing brand awareness with the help of Amazon, and we are regularly in touch with the customers. Starting with Punjab, we began focusing on the offline market as well. We are also in talks with other channel partners to launch the brand in different states.

If we are talking about performance issues or freezing on TVs, it used to happen when smart TVs were new. Now the technology has become advanced and manufacturing has evolved so much that TVs don’t hang much as they used to do. At Videotex, we do certain tests for the low RAM TVs and our television units don’t freeze. We’ve also been running them at the lowest Mbps speeds and found no such problems.

Another reasons for the performance issue is the use of unofficial apps on smart TVs. Some brands are just downloading APKs without knowing if these apps are compatible with their product or not. The advantage of our TV is that we have a direct sign up with the app providers.

For Hotstar, Zee5, Sony LIV, Jio Cinema, Eros Now and some other apps, we are directly associated with the providers and have the direct APKs, which is why our TVs don’t get have these performance problems and get regular updates. Also, the customer doesn’t have to update the TV app manually, it is done automatically from the backend.

You have different competition in offline and online markets. With the presence of players like MarQ,

We believe in the quality of our product. We plan to give certain advantages to the customer which other manufacturers are not offering along with the pricing and good after-sales service. We take pride in our after-sales services where customers can just raise a call back request and get their query solved. We have created an app also, which lets users raise a complaint. The after-sales service is provided at home with a simple request through the app and the customers don’t need to leave their home.